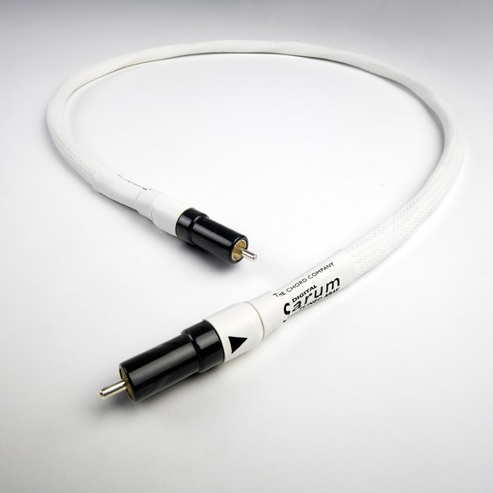 This is going to change the way that people listen to digital music, how can a cable make that much difference!” The Sarum Tuned ARAY Digital is the new and radically revised version of the already highly thought of Sarum Digital.

The new Tuned ARAY conductor configuration lifts the performance to a new level, and yes, detail, dynamics and soundstage are all better. The really big deal though is just how more musical your system is going to sound.  Suddenly everything is easy and enthralling to listen to and whatever you play will draw you into the performance.

The cable used to carry the signal is extraordinarily complex, with micro-polished silver-plated conductors and a very high-density silver-plated spiral shield, the most efficient shielding we have yet used.  The silver-plated plugs are surrounded with Chord’s precision acrylic plug casings.

Every element of an interconnect’s construction is important and Tuned ARAY cables need to be assembled with a forensic degree of precision.  The result of this though is transformational; it’s about digital music, be it CD or streamer, turning into something you can almost reach out and touch.  It’s about your favourite music becoming a performance.  It’s about the CDs you didn’t like to play suddenly sounding approachable and involving instead of hard and compressed.

Listen to the Sarum Digital with:  Anything you want to!

The cable used to produce the Sarum Digital Tuned ARAY is not only complex, it also requires an extraordinary degree of accuracy in its build.

The multi-stranded silver-plated conductor array used to such astonishing effect in the Sarum analogue cables is replaced with highly polished, heavily silver-plated, single core signal conductors. The gas foamed PTFE insulation was changed to an even lower loss air spaced PTFE combination, which along with an extruded PTFE surround layer, helps to damp internal vibration.

Vibration control (mechanical damping) proved to be even more critical with digital cable than it is with analogue cable.  The seemingly obsessive attention paid to it in the construction of the Sarum Digital cable is, along with an extraordinarily and very high density shielding, partly responsible for the astounding improvements that this cable can make.

What really lifts the performance of the Sarum Digital and makes listening to it so important is the Tuned ARAY conductor configuration. This is tuned to optimize performance with digital cables.  The effect this has on performance can be transformational.

The Sarum Digital Tuned ARAY will allow you to experience music with greater realism and emotion, and with a level of musical rightness that has not been previously available.