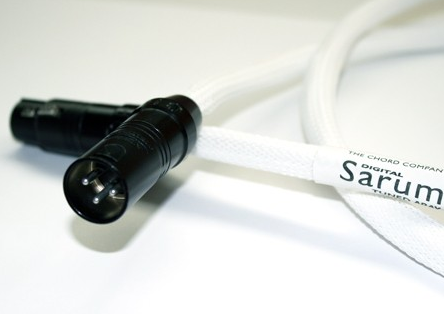 “That’s the first time I’ve heard an AES-EBU connection make real musical sense, and there’s so much more detail as well.” Of all the digital connections available, the one that’s been most challenging for us has been the AES-EBU connection.

There was no denying that it was a good connection to use in terms of detail, but so often we found ourselves preferring the coherence and involvement that the 75 Ohm co-axial S/PDIF connection produced.

The Sarum Tuned ARAY AES-EBU changes that.  Now we have an AES-EBU that still carries amazing amounts of detail, but now it does so in such a musically coherent way, that the gap between the AES-EBU and co-axial 75 Ohm connection is more than narrowed. The choice has got more complicated!

Once again it’s the Tuned ARAY technology that brings such an extraordinary improvement. The rock solid image, the enormous amounts of detail and dynamic information and all presented in such an easy to hear and musical way.

We think this is the biggest step forward for the AES-EBU connection we’ve come across. We still think though that if you have the option, you should try both the 75 Ohm co-axial S/PDIF and AES-EBU connections and decide for yourself which one you prefer.

We listened to: “Crazy on the Weekend” by SUNHOUSE (hard to find but so worthwhile if you can).

Track 2 for the biggest harmonica ever and the shock of the drums.

Track 7 for the guitars, organ and vocals.

Each conductor used to produce the Sarum Tuned ARAY AES/EBU cable is a micro-polished silver-plated single core conductor.  Each conductor is insulated with gas foamed PTFE and insulated with the same heavy gauge dual foil and silver-plated braid that is used on other Sarum cables.  Like those cables the Sarum Tuned ARAY AES/EBU cable has been tuned to carry a digital signal with a very high degree of accuracy.

The Sarum Tuned ARAY AES/EBU cable is fitted with a specially adapted XLR plugs.  The contacts are silver-plated, and in order to avoid any compression on the conductors and shields that would affect performance, the Sarum Tuned ARAY AES/EBU is fitted with custom made anodised aluminium rear sections, produced by a British engineering company who specialise in small runs of high precision parts.

This is probably the first time that we have been truly happy with the performance of an AES/EBU cable.  We think that Sarum Tuned ARAY AES/EBU manages to produce a sound that is both detailed and musically coherent.  Even so, we would still suggest that at this level of performance you should make no assumptions.  Listen to the AES/EBU but listen to Sarum Digital RCA as well.  Make your own mind up.